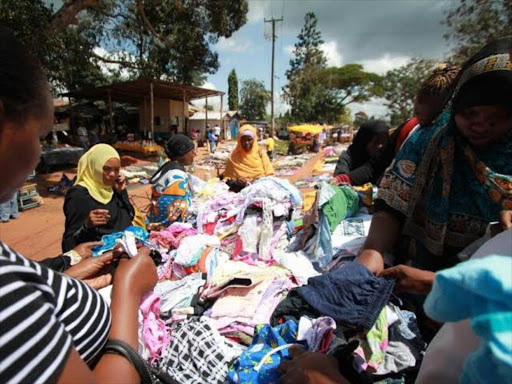 The majority of Kenyan households buy second-hand clothes, a report has revealed.

The report by the Institute of Economic Affairs and Mitumba Consortium Association of Kenya indicates that 91.5 per cent of households across the country bought second-hand clothes well known as mitumba in the year 2019.

The report further indicates that 74.5 per cent of the households bought new clothes priced above Sh1,000.

According to the report, mitumba import taxes added up to US $15,000 per 40ft container (equivalent to 24 tonnes).

“Kenya imported 185,000 tonnes of second-hand clothing in 2019, equivalent to an approximate 8,000 containers. The taxes paid amounted to Sh12 billion,” read part of the report.

The mitumba sector contributes to at least Sh1 billion in revenue per month.

The traders also pay business license fees, among other payments to national and county governments.

“Apart from revenue generation for government, they offer livelihoods to almost two million people. The two million people estimated to be in the second-hand clothes industry are employed in more than one sector, such as farming,” the report said.

Employment in the sector covers handling, alterations and refinements and distribution of clothing.

The report indicates that the value of these imports for the corresponding years has risen by 80% from Sh10 billion to Sh18 billion in a six-year period.

“What this growth in import volumes shows is that along with the overall economic growth and the rise in incomes, imports reflect the demand for second-hand clothing among Kenyan households and that this industry has supply stability,” it said.

A fundamental revelation of this information is that in 2016, the value of the median and mean purchase of new clothes was Sh450 and Sh783 respectively for three months.

This demonstrates that half of the households that bought new clothes made purchases of Sh450 or less, with the other half spending more than that amount.

“The average cost of the clothing items purchased comes to Sh783 for the same period. Both the median and the mean value for purchases of used clothing and footwear are below the equivalent values for new items,” the report said.

With a purchase mean of Sh409 and median of Sh280, these values are 33 per cent and 91 per cent lower for used clothes respectively.

“This position confirms that the purchasers of second-hand clothing and footwear are price conscious and search for value due to their lower incomes,” the report said.

From a consumer’s viewpoint, the report said it is evident that purchase decisions reflected are based on making choices on what items are available at the most cost-effective prices on each side.

According to the report, the typical income earner in Kenya spends about 40 per cent of monthly earnings to procure food alone.

The rest of the available income is spent on shelter, transportation, education, health, and other needs.

“2.5 per cent of private consumption in Kenya was spent on clothing and footwear for the year 2019. This spending amounts to Sh197.5 billion which comes to an average of Sh4,150 per person per year for all purchases of second-hand garments, new clothes and footwear,” the report read in part.

Compared to the rest of the middle-income countries, the report said Kenyan consumers spend much less on clothes and footwear.

An insight that comes from the report is that imports of secondhand clothes constitute about 1% of all imports’ monetary value while it accounts for 2.5% of all private spending.

Some 67.8% of Kenyan households in urban areas spent Sh1000 and below, while the corresponding figure for rural dwellers was 79.2%.

This finding the report said is consistent with the evidence that rural dwellers have lower incomes and are more interested in affordable clothing and footwear.