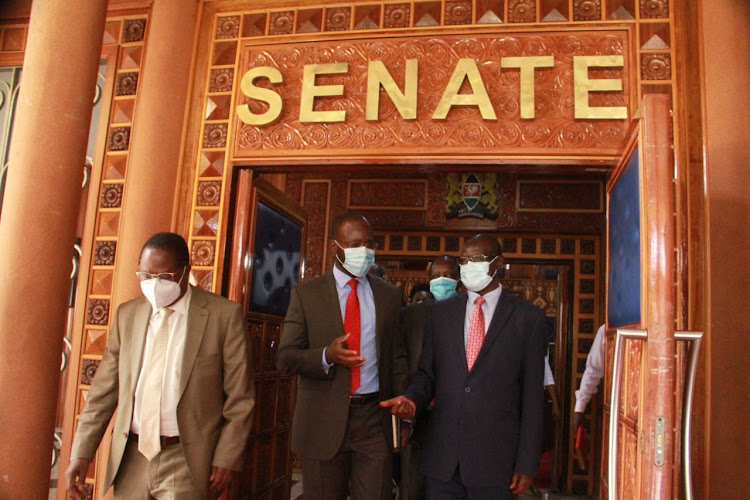 SENATE: Council of governors chairman Martin Wambora, chairman of the devolution committee Moses Kajwang and Meru Governor Kiraitu Murungi leave the Senate chambers after a meeting to build an amicable working relationship with the CoG on March 2/Courtesy

Governors on Tuesday said many Kenyans are skeptical about the vaccine and called on top leaders, headed by President Uhuru Kenyatta, to publicly take the first jab to dispel safety fears.

Governors also deplored their noninvolvement in the importation and development of protocols for countrywide launch.

About one million doses of the AstraZeneca vaccine landed in the country on Tuesday night to strengthen the government’s fight against the contagion.

“We don’t want a citizen, senator or a governor to die because he was vaccinated. All of us must be convinced in the national interest that it is the best and safe,” Nyandarua governor Francis Kimemia said.

Meru Governor Kiraitu Murungi said the President, Health CS Mutahi Kagwe and other top government officials should publicly take the jab before ordinary citizens do so.

“I think after consultation, I will support a proposal we start from the top leadership from the President to be first people to be vaccinated,” Murungi said.

The county bosses spoke during a meeting of the leadership of the Council of Governors and the Senate’s Devolution and Intergovernmental Affairs committee.

The council said despite arrival of the vaccine, governors were not privy to details or involved by the Ministry of Health on its roll-out.

“I have not even met the Health CC Mutahi Kagwe. We have only communicated on mail and that is almost all,” said Governor Anyang Nyong’o who chairs CoG’s Health committee.

The Kisumu governor spoke during a meeting of Senate’s Devolution and Intergovernmental Relations committee and the leadership of the CoG.

Newly elected COG chairman Martin Wambora of Embu led the high- level meeting where the status of devolution and ‘teething; challenges were discussed.

“I hope a robust discussion will take place as quickly as possible, so there is clarity on the vaccination process. If there is any fear accompanying the process, it should be cleared before the roll-out,” he said.

Nyong’o said he has requested a meeting with CS Kagwe to discuss the protocols for roll-out, safety concerns and other issues surrounding the vaccine.

“The Health CS should share these finer details. I do not see any reasons why he should not share,” he said.

Nyong’o was responding to queries raised by committee members on whether the county governments were involved in procuring the vaccine and developing protocols.

“Are the governors aware of this development or it’s just the normal national government way of doing things?” Senator Ali asked

Nyamira Senator Okong’o Omogeni said while he was watching  TV in the morning, a Kenyan from Nyeri county had asked whether as a sign of trust the governors would take the first jab.

“He said if he does not see that, he must conclude the vaccine had been brought for common mwananchi and there is a better one coming for the leadership,” Omogeni said.

“So,  are the governors going to be first ones to take this jab so we build confidence in our people this vaccine is safe and has no adverse reports?” he asked.

Wambora said county chiefs would not take the jab, at least for now, saying they will give priority to frontline health workers, teachers and security officers as stated by the Health ministry.

But Homa Bay Senator Moses Kajwang’, who chairs the committee, raised concerns that the governors reluctance to lead from the front in taking the jab might spark safety concerns.

He said their not taking it now might create a narrative of two versions of vaccines — one for the common man and the other for leadership.

Nyong’o said Kenyans should not get too worried as the vaccines have landed. He said there will be training for those who will administer the vaccine.

Quoting Shakespeare [Falstaff, King Henry IV] as saying, “Desecration is the better part of valour”, the Kisumu county chief argued the Ministry of Health and county governments should be cautious.

“Let’s be discreet about it but do it properly and that is why I am waiting to meet the CS and discuss these issues. They should be widely discussed with major institutions, especially those delivering healthcare, like counties headed by governors,” he said.

Senator Ali interjected, “Governors should be forthright and say that they have no information totally, they are not being involved and they have not done anything.” He said they should be firm in demanding their rights.

Governor Kimemia called for greater involvement of all stakeholders including Parliament, the national executive, COG and churches.

Kimemia said if the vaccination comes and the repercussions are fatal, there will be no opportunity to blame each other.

“Let’s take this issue to be an area of great national concern looking at what is in the social media and the health sector, nobody seems to be sure of things.

“We need to engage actively all denominations, communities and political leaders, it’s not the issue of who should be vaccinated first, the issue should be if it’s safe,” Kimemia said.

CoG vice chairman James Ongwae said the issue of developing protocols for the national roll-out needs to be properly formalised and seised by the Senate Health committee and its counterparts at COG and the MOH.

He insisted that the protocols that have been developed should not have been done by one party – the ministry alone.

“We should all agree on these protocols, if it’s the leadership like it was done, I think it’s Uganda, they started the vaccination with MPs. They interacted with many people, it’s basically an issue of determining protocols,” Ongwae said.

“If you are starting with health workers or political leaders and it has been agreed broadly among us sectors, let it be. But it is not good for leaders to be seen to be benefiting from the vaccine,” the governor said.

Ongwae likened the vaccine roll out to an aircraft that has crashed and the pilot and the cabin crew being the last to come out of the plane.

“What we seek as leaders is to let the protocol be clear and widely agreed,” Ongwae said.